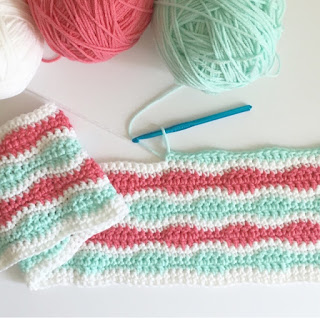 I started sharing my crochet work with an Instagram account called @daisyfarmcrafts. Each day, I considered a picture to create to add to all the other loveliness that I saw, daily, or sometimes hourly!

They do grow, those kids, and become adults and move on and create their own loveliness without me needing to document it anymore. I’m left with the creations of a different sort and right now, it’s blankets of the crochet kind.

My husband has found his niche too. We bought a place on a little bit of land, that I call a farm, but he calls–property with farm-like qualities, (always the legal definer that man), with the hope of creating a new space for Annie. For all of us, actually. We needed to leave the house of seizures, broken legs, restructured feet, and surgeries galore

This new place happened to come with a multitude of rose bushes that has inspired my husband to create in his own way; with a shovel and some fertilizer. And now, thanks to him, I have beautiful rose bushes lining the edges of our little farm, of all colors.

But while I’m on the subject of creating, there is another purpose to my blankets. My oldest daughter Hannah would like to have a baby and I would like to be a grandma for the first time. Hannah has been married for over five years and no little babies have decided to join them quite yet. She is healthy and her husband too. All they need is a bit of luck and a lot of faith. So, I had a thought one day. A question popped into my head, actually. What if I started crocheting a blanket for the baby, even though no baby was officially announced and on the way? It was a “Field of Dreams” type question. If I crochet it, will they come? That sort of thing. I started a creamy off-white and sage green blanket that could go either way, it was gender neutral.

I told Hannah, I was going to practice my faith, and just crochet it, because I knew that someday, she would have a baby. But, here is the interesting thing that happened. I ran into a good friend, who had been wanting a baby for a lot longer than Hannah, and I told her of my idea. As I did, I got the feeling that the blanket I had started might not be for Hannah. Fast forward three months, and I ran into this same friend, and miracles of all miracles, guess who was having a baby? Her! After ten or so long years, she was having a baby! My idea worked!

So, I started another one. This time I was bold. I thought, “I’ll make a girl one, maybe Hannah’s baby didn’t want a gender neutral blanket.” I picked coral, and white and gray and got started on it, and what do you know? Three months later, Hannah informs me that another close friend who had been married as long as her was finally having a baby. And, it’s a girl. So, that baby blanket was for her. I’ve started another, it’s a chunky blue and cream for a boy, and now I can’t wait to find out who it’s for, Hannah? Someone else? I don’t even care because my idea is working! My idea is actually working!

And now, what I can’t wait for is that day, when I have created THE beautiful, perfect, blanket, and hold in my arms, my first grand baby. Then what I’m going to do next, is wrap the baby up in the blanket and take him or her outside to see all the different colored rose bushes Grandpa created for his farm-like yard!

Although, I wonder if my husband is going to have to start building a baseball field in the backyard along with the rose bushes, at the same time I’m creating this blanket….

Yarn and Book Giveaway with Yarnspirations!